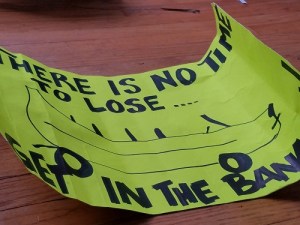 This might be a bit long but I hope my friends and fans of The Big Banana Car will enjoy it.  Shop girl Emily has been talking about the Amy Schumer show for the last couple of weeks, saying it would be great to give a B Car ride. Attempts to contact Amy’s people on social media were unanswered. She told me yesterday, the day of the show, that she wanted to take the banana car to the show to see if anything happens. I told her go for it.  I was not interested and had decided to stay home. But she sent me a text at 7:30 and said she had a ticket for me. I found the motivation to get to Wings Stadium. Emily had gotten last minute tickets in the 4th row center!

Amy begins her act. Emily has a neon yellow sign that she holds up to get Amy’s attention and ask her to ride in the Big Banana Car. When the star mentions the Banana Car into the microphone the crowd cheered. I had tears in my eyes!  In the 3 years we have had The Big Banana Car in Kalamazoo I have never felt so supported. We were disappointed, however, that Miss Schumer declined our invitation. We hope that someday she may reconsider! 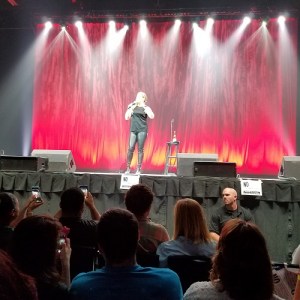 I have heard so many great things people have said about the Banana Car but, the cheers from the large crowd last night was by far the best acknowledgment we have ever received!  THANK YOU KALAMAZOO!  And a huge thanks goes to Shopgirl.  She was determined to have fun, and she knew it would be good exposure for us.  I am very impressed with her tenacity and willingness to be a target of a jokes.  We are glad to have her on board.