­On April 11th 2018 the Big Banana Car set off from Santa Monica in California on, what is being called, The World Needs More Whimsy Grand Tour.

Almost straight away it was in a crash!

I stopped for a red light on Santa Monica boulevard, right across from the iconic Beverly ‌Hills police station, the one featured in the movie Beverly Hills Cop, but the car behind didn’t stop. There was no screeching of tyres. The car just drove into the back of the Big Banana Car! 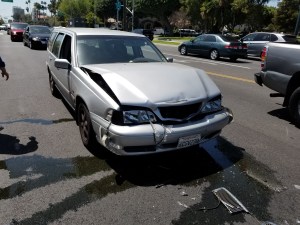 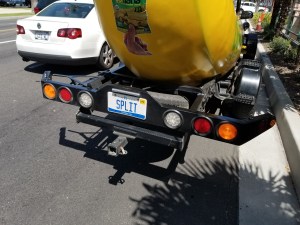 Ron Kutt and I fabricated the rear bumper and its strength is due, in no small measure, to Rons welding skills.

(Just look at that wonderful shadow of a palm tree. Ah California how I love you so.)

It was amazing how quickly the police were on the scene. They must have been looking out the police station window and just leapt up and ran out the door.

No one was hurt and it was clearly the fault of the other driver so I was free to continue on my way.

Nothing could dampen my spirits on that sunny California afternoon, not even a minor “fender bender” as I continued onward knowing that the great American highway and a year of adventure lay ahead.